The cryptocurrency market is regaining ground after a bad few days. Its total cap has risen by 5% in the past 24 hours, to $2.41 trillion. Most major coins have risen along with the market, with bitcoin (BTC) and ethereum (ETH) increasing 2% and 5% in the past week, respectively.

In honour of this resurgence, we’ve put together a list of the 5 best cryptocurrency for a price rebound. This covers coins that not only show good potential for recovering in the short-term, but that also look good for the longer term.

5 Best Cryptocurrency for a Price Rebound

BTC’s technical indicators suggest that it may have just begun a breakout. Its 30-day moving average (in red above) formed a golden cross with its 200-day average (blue) yesterday. Similarly, its relative strength index (in purple) is hovering around 60, suggesting momentum without being overbought.

It needs to be underlined that today and yesterday-s market-wide rally wouldn’t have happened without BTC rising first. The cryptocurrency leads drops and jumps in equal measure, so anyone expecting a Christmas bull market really should allocate some of their portfolio to BTC.

It also goes without saying that bitcoin has attracted more institutional interest than any other crypto.The Indiana-based STAR Financial Bank launched bitcoin-trading services for its customers on December 2, in partnership with NYDIG and Alkali. And earlier in November, the Commonwealth Bank of Australia announced a similar service for its customers. It joined a long list of banks who also embraced BTC this year. 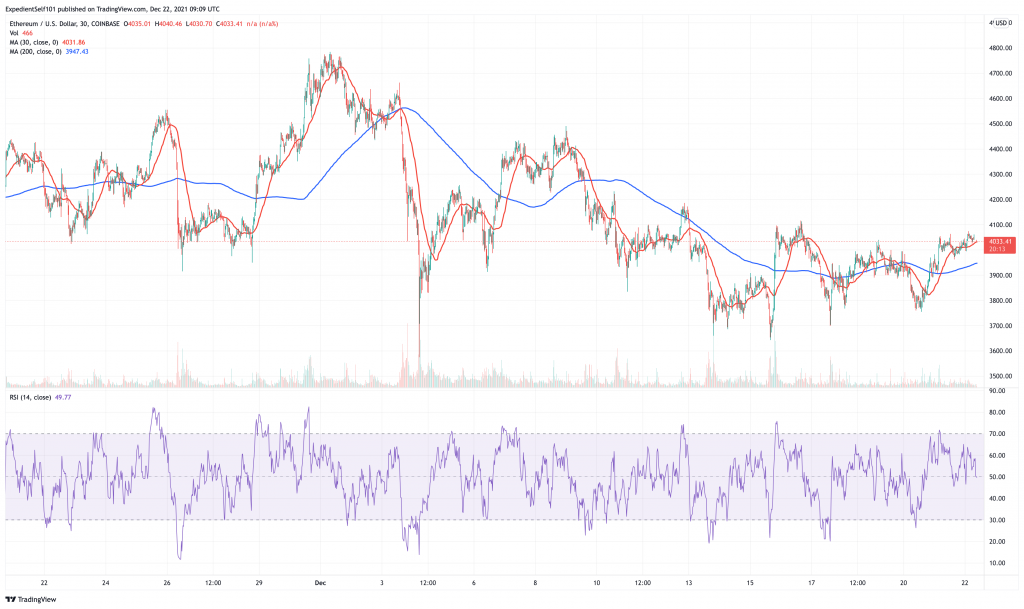 ETH’s indicators are much like bitcoin’s. In other words, it too could be on the brink of a breakout recovery, with its 30-day average continuing to climb.

And arguably more than any other cryptocurrency, ETH could be set for a bumper 2022. This rests on Ethereum’s transition to Ethereum 2.0, which will use a more scalable proof-of-stake consensus mechanism.

This is due at some point in “~Q1/Q2 2022“. When it does happen, it will likely result in a big rally for ETH. More generally, it could result in ETH becoming significantly deflationary, since it will rely on holders staking their ethereum in order to validate transactions.

In fact, ETH has already shown itself to be deflationary at various points this year. This is the product of the London hard fork, which results in base transaction fees being burned. In total, Ethereum has burned 1.15 million ETH since December 9, a trend that will be magnified by Ethereum’s shift to proof-of-stake next year.

Since the implementation of EIP-1559, #Ethereum‘s fee market mechanism changed for good

The now called “base fee” is being burned, meaning that since the London Hard Fork was implemented, a total of 1.15m $ETH has been burned so far

On average 11,500 ETH are being burned daily pic.twitter.com/V7RBWkq7u0 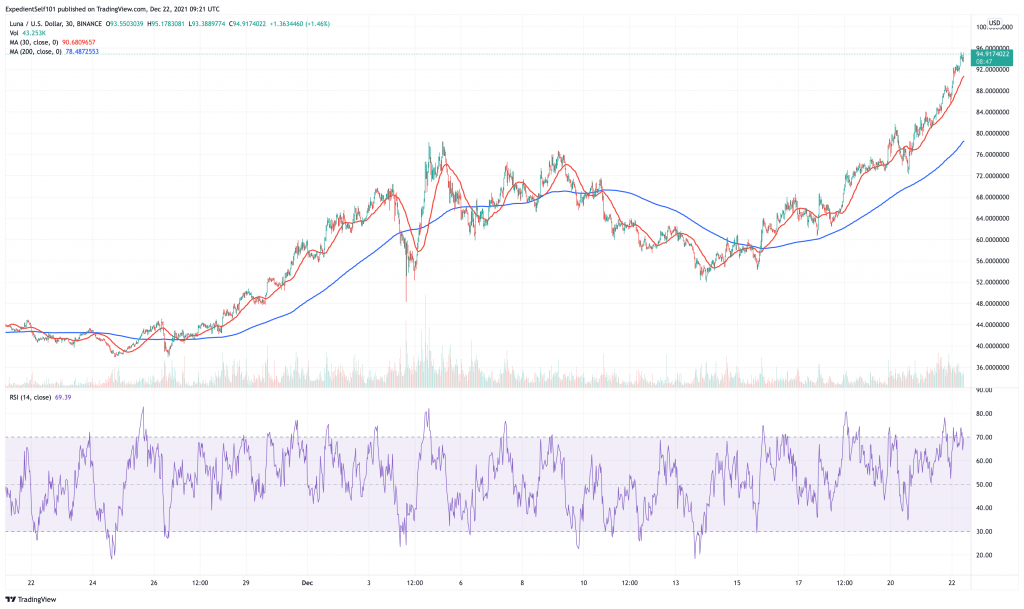 LUNA’s chart suggests that the market is on the brink of overbuying it. However, its momentum remains very strong, and with the rest of the market remaining in an uncertain state, it may continue picking up the slack.

Part of the Terra ecosystem, LUNA helps maintain the peg of Terra’s stablecoins (such as UST). The Terra protocol also burns LUNA whenever it mints new stablecoins. So given that the supply of UST, for instance, has increased by over 200% since the start of November, it’s little wonder that LUNA is still rallying hard.

Terra has also been busying announcing new integrations and partnerships. It launched the first Cosmos-native UST/LUNA trading pair less than one week ago, while it also partnered with NEAR and Aurora yesterday. Such partnerships will only expand its growing ecosystem, with LUNA’s price growing in parallel. This is why it’s one of our 5 best cryptocurrency for a price rebound, not that it needs to recover itself.

1/ The first Cosmos-native perpetual LUNA/UST pair is now available for trading on @InjectiveLabs! 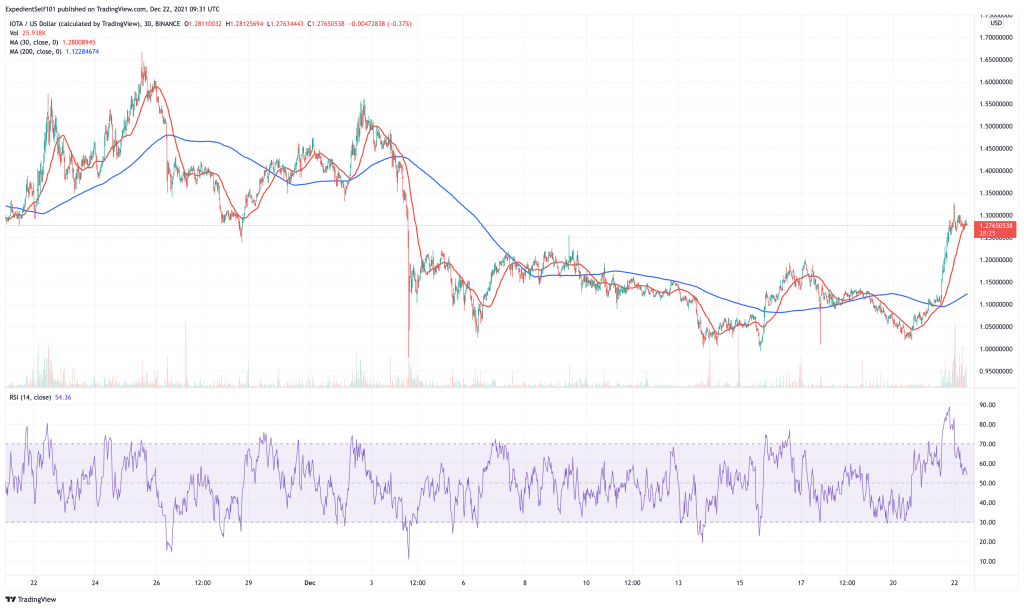 IOTA is surging because of the arrival of staking on Iota. Iota first announced this on November 16, but it was yesterday the pre-staking was officially opened.

The launch of pre-staking has incited strong demand for IOTA. And with Iota also expanding its internet-of-things blockchain to include smart contracts and DeFi functionality, we expect IOTA to be one of Xmas’ strong performers. 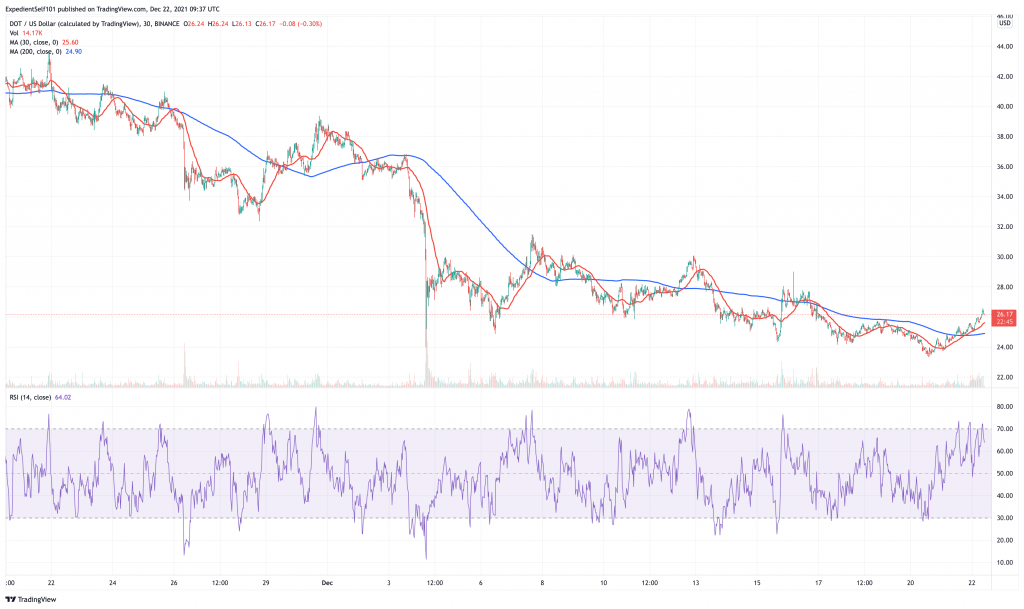 DOT is long overdue a rebound. It has been slipping consistently since the market-wide downturn appeared in November. However, it’s 30-day average formed a golden cross with its 200-day earlier this morning, indicating a possible breakout. Its RSI also suggests strong momentum, and what’s potentially encouraging is that DOT has lots of lost ground to recover.

Polkadot itself has enough good news going on to encourage a rally. It has now opened its first five parachain auctions, which decide which platforms/apps will join the Polkadot blockchain. In fact, Polkadot officially onboarded the first five parachains on December 18.

On Dec 18 history was made when the first five auction-winning parachains were onboarded to Polkadot. This marked a remarkable milestone reached by the Polkadot network – delivering the final piece of functionality to achieve the vision of Polkadot as outlined in the whitepaper.

With these parachains joining the main relay chain, and with more auctions due in the coming weeks, expect Polkadot’s ecosystem to begin steadily growing out. This will create more organic demand for DOT, which sooner or later will see its overdue spike. This is why it’s one of our 5 best cryptocurrency to buy for a price rebound.