The cryptocurrency market has continued to slide over the past 24 hours. At $2.7 trillion, its total cap has fallen by 3% in 24 hours, and by about 10% since a week ago. Every major cryptocurrency has fallen in parallel, with bitcoin (BTC) dropping by 11.5% in seven days. However, cheap coins potentially provide the opportunity to make big gains once the market rebounds. Accordingly, we’ve chosen the 5 best penny cryptocurrency to buy now. These are coins priced at around $1 or under.

SHIB has fallen steadily ever since its all-time high of $0.00008616, set on October 28. Unsurprisingly then, its relative strength index (in purple above) has fallen below 50, indicating a selloff. At the same time, its 30-day moving average (in red) has begun sinking below its 200-day average (blue). While this obviously reveals a loss in momentum, it also suggest an upcoming rebound.

While SHIB is undoubtedly a memecoin, it has a big community behind it and some very famous backers. Its Reddit page now has 430,000 subscribers, up from 175,000 in mid-June. It also counts Elon Musk as a (sometimes inadvertent) cheerleader, with a Musk tweet from late October responsible for its recent rally (although Musk has denied personally owning SHIB).

Given the number of holders behind it and its history, we wouldn’t bet against SHIB making some sizeable gains once the market recovers. This is why its one of our 5 best penny cryptocurrency to buy right now. 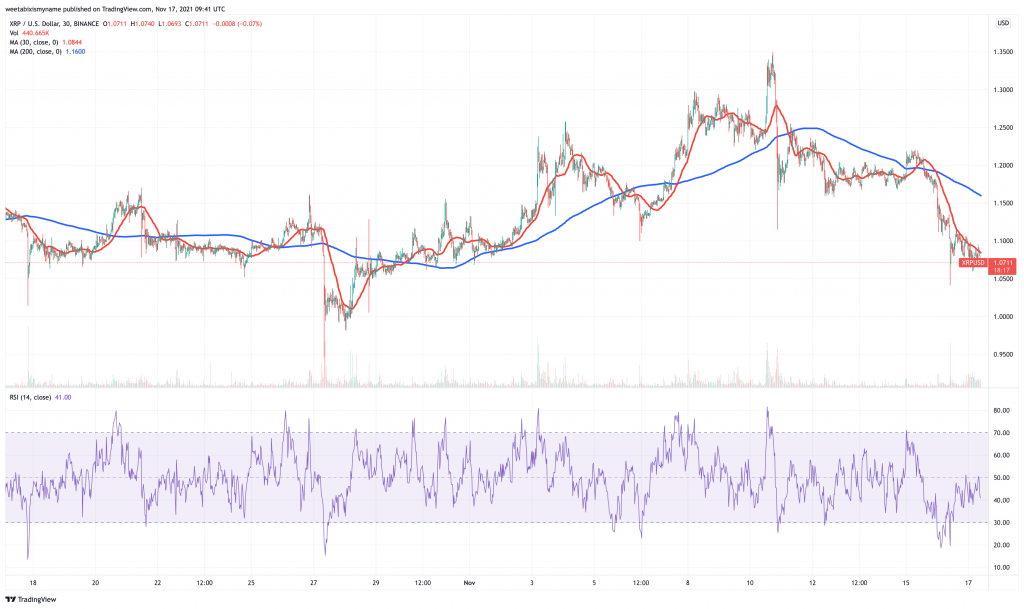 XRP’s 30-day average has fallen way below its 200-day, indicating that it’s currently oversold. This is supported by its RSI, which is nearing 40.

As a cryptocurrency, XRP’s future hinges on Ripple’s ongoing legal battle with the SEC. If it’s settled favourably for Ripple, then we’d expect XRP to experience a very significant rally.

And the latest on this case is that things are going quite well for Ripple, with a ruling at the end of October making things more difficult for the SEC.

“any” (typo). I’m putting my girl to sleep – a little distracted by cuteness. 🙂

I think overall you feel pretty good if you are Ripple after reading these Orders. And if you are an SEC lawyer, you are preparing to work some weekends…

At the same time, Ripple continues to grow in terms of its ecosystem, despite its legal issues. At the end of last month, it announced a partnership with international blockchain-based financial services company Pyypl. Together, the pair will bring instant, low-cost remittances to the Middle East region, beginning with the UAE. 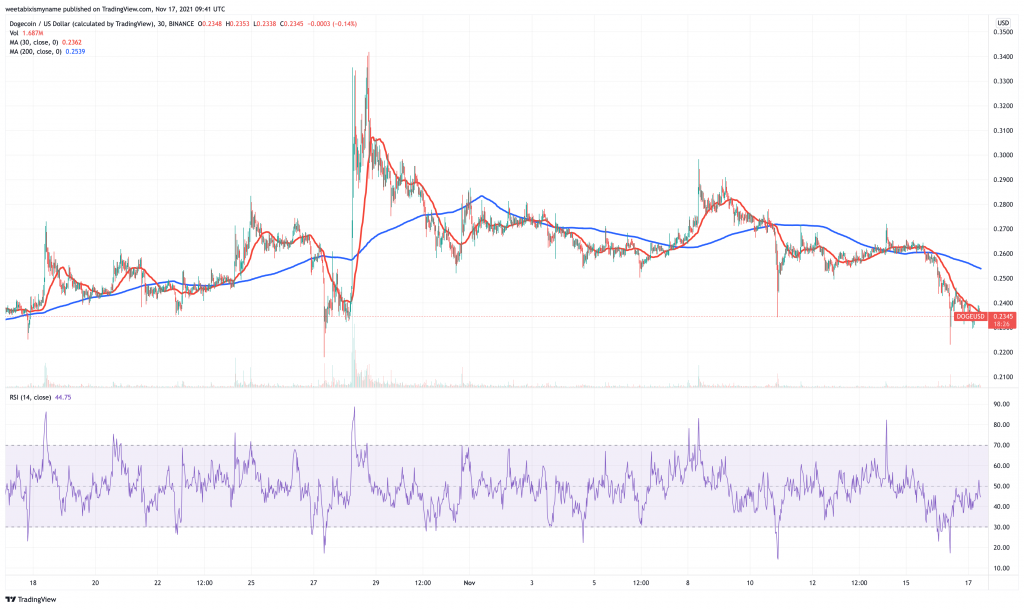 DOGE is another coin whose 30-day average has tanked below its 200-day. Again, this suggests that it’s nearing a bottom, as does its sub-50 RSI.

As with SHIB, DOGE has nothing going for it beyond its large community of supporters and holders. It’s pretty much nothing but a vehicle for speculation, but so far it has proven an effective one if you’ve managed to get the timing right.

In fact, DOGE’s community is larger than SHIB’s. Its Reddit page now has 2.2 million subscribers, while its verified Twitter page has 2.5 million. If nothing else, this suggests that it will continue to see rallies in the future.

It’s also worth pointing out that Dogecoin, as a protocol, has benefitted from numerous upgrades since DOGE gained steam this year. The latest arrived around a week ago, testifying to its robustness as a platform.

we do a little releasing.https://t.co/aDSGvv52vi 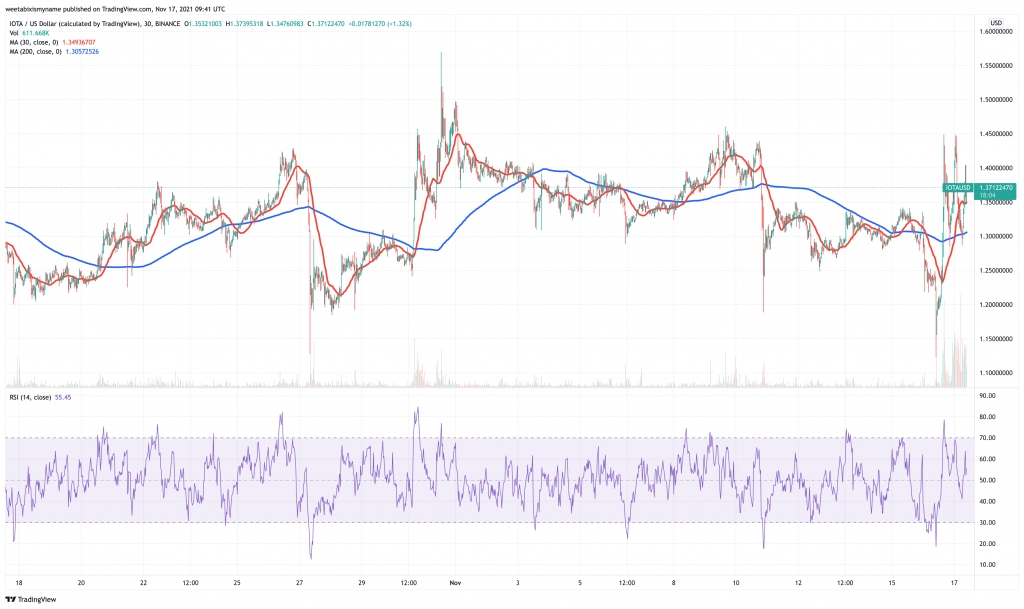 IOTA’s technical indicators show that, contrary to the rest of the market, it has some momentum behind it. Its 30-day average has jumped its 200-day, while its RSI is nearing 60. Neither metric is ‘too’ high, suggesting that its recent fortunes may continue.

The reason for IOTA’s trend-beating rise today is that Iota has just launched staking on its platform for the first time. As part of this launch, people who stake IOTA will receive shimmer (SMR) tokens in return. This has increased the market’s demand for IOTA, while it has also raised hype surrounding Iota. As a network, Shimmer will be used as a kind of development testbed, helping to accelerate Iota’s evolution.

All #Shimmer tokens will be distributed to IOTA stakers. Stake your $MIOTA to get free $SMR tokens.

Be early and get your share of a new token economy. https://t.co/jn83hPTrza@shimmernet 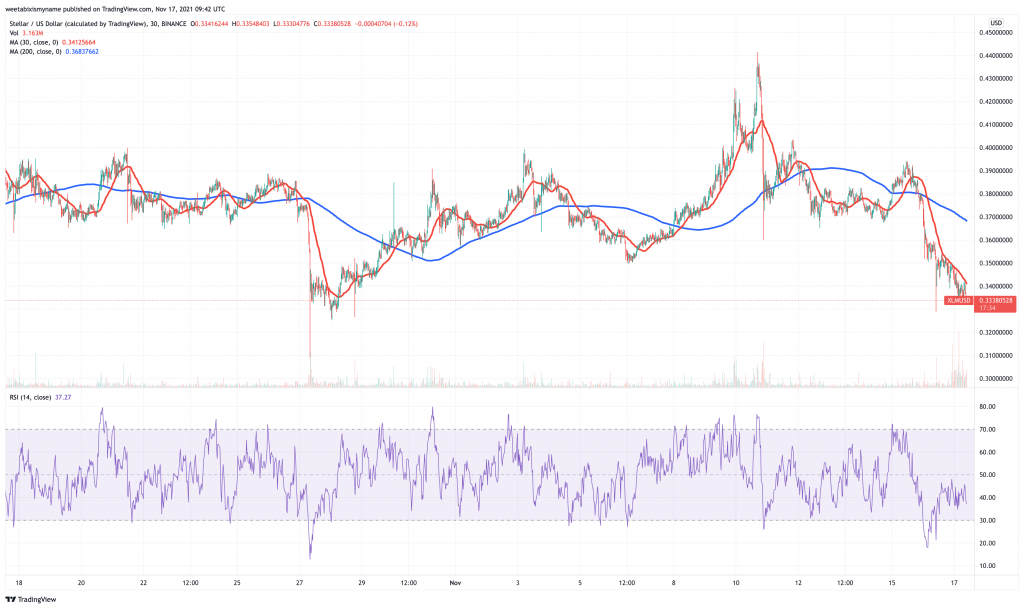 XLM’s indicators suggest it’s reaching the point where it all-but has to jump up again. Its RSI is nearing official ‘oversold’ territory, while its 30-day average is far below its 200-day.

XLM is the native token of Stellar, a money-transfer network that’s more or less comparable to Ripple. It continues to experience growth as a platform, with the Stellar Development Foundation recently announcing a partnership with MoneyGram.

Last month, SDF announced a transformative collaboration with @MoneyGram to bridge digital assets and local currencies. Join us tomorrow at #Meridian2021 for a conversation on our work together, hosted by @mlinhuawu with @walexholmes and @DenelleDixon. pic.twitter.com/NmzL7vefnr

It may not be the most hyped coin right now, but given Stellar’s steady growth and development, it’s one to watch for the future. This is why it’s one of our 5 best penny cryptocurrency to buy.