The past week has been uneventful for Bitcoin and Ethereum, but did see bring a fair bit of volatility, as both coins struggled to breach their respective resistances. Bitcoin price was stuck at trying to go beyond $51k, while Ethereum pushed against $1,600

Fundamental analysis: What is driving the prices?

As mentioned, the past week did not see significant moves for BTC and ETH prices. With that said, there were a few events that may have helped investors gain renewed confidence in the market.

One of them is a Bitcoin forecast based on the coin’s stock-to-flow model, which indicated that BTC could not only reach $100,000 per coin by the end of the year, but also exceed it. According to the forecast, published by Plan B on Twitter, BTC price could go anywhere from $100k to $288k before the year ends.

A few weeks ago, the Federal Reserve appointed a pro-Bitcoin Chief Innovation Officer, Sunayna Tuteja. However, this was not the last pro-crypto individual to take up a notable position; President Biden’s SEC chair pick, Gary Gensler, also has a positive stance towards cryptocurrencies. Gensler is an MIT professor who teaches about cryptocurrencies and is a former CFTC chairman. If he were to become the SEC chairman, he would likely have a major impact on the development of the crypto sector in the future period.

While Ethereum is clearly following Bitcoin’s lead — the two coins have near-identical charts — ETH did see some important development on its end, as well. Namely, Amazon-managed blockchain, which has been teasing support for Ether for over two years now, finally came through and added support for the coin. Now Ethereum has a powerful new use case, while AWS customers can provision Ethereum nodes in minutes and with great ease.

Bitcoin’s market dominance has been undeniable, and further evidence of its strength can be seen by anyone willing to compare BTC and ETH charts on CEX.IO.

The coin has led the market upwards from a significant drop in the last week of February. Its own price recovered from $43.2k to $50k on the first day of March. After that, BTC saw a short correction to $48.6k, only to surge once again and even go beyond $52k on 3 March. This was followed by yet another correction, which ended up taking it back down to $46k by 5 March.

Bitcoin did not stay at the bottom long, however, as it began another recovery — this time however, it was interrupted before it managed to reach $50,000 per coin. At the time of writing, its price sits at $49,000, trying to grow further up, but being kept back by a strong resistance at $50k.

Ethereum has followed this price performance, although it saw a significant number of fairly small fluctuations along the way. 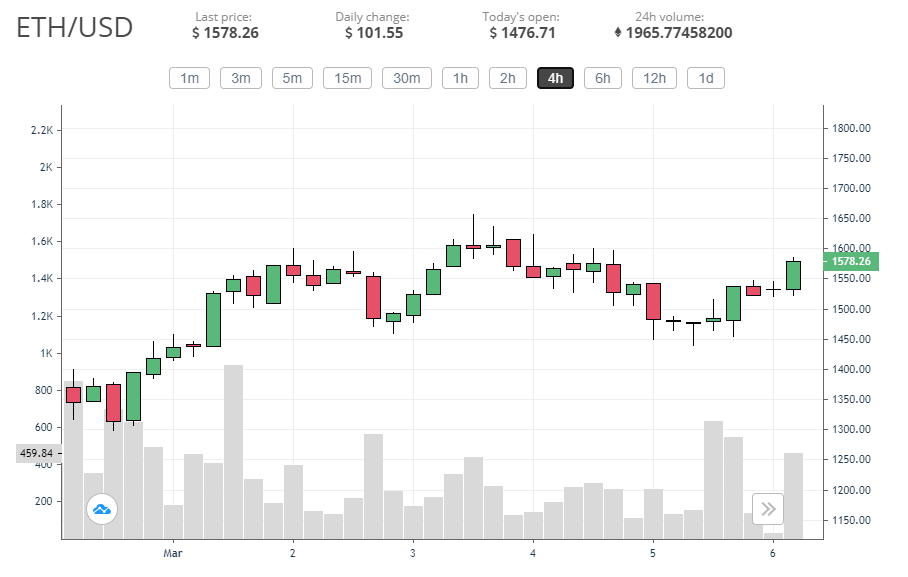 After hitting $1,299 on 28 February, according to CEX.IO, ETH price skyrocketed, hitting $1,600 in the early hours of 2 March. Similar to Bitcoin; Ethereum saw correction after this, followed by another surge — this time to $1,657. The surge was once again replaced by a price drop to $1,450, with ETH currently trading in the green, as it makes another recovery.

What will happen with BTC and ETH?

While both coins have fallen below their respective ATHs, most analysts and experts agree that the rally is not over — just temporarily delayed. Plan B’s forecast that BTC will go anywhere from $100k to $288k is certainly an optimistic one. We, however, expect to see BTC at $50,000 by the end of this quarter, which will also mean the end of this month. We expect to see the return of the rally sometime in Q2, which will then take Bitcoin to a new ATH at $80,000. By the end of the year, the coin could go up a bit more, and hit $90,000 per unit.

As for Ethereum, we expected its price to still be at $1,300 by the end of Q1, and while this is not impossible, it does seem unlikely at this point, since the coin has strongly outperformed all expectations. However, it has yet to return to its ATH, which we believe it will, and that its price can grow to $2,200. It could be back above $2k by the end of Q2, and then we expect it to more than double this price by hitting $4,900 by the end of the year.

This Monday, 8 March, Bitcoin and Ethereum prices made another surge up. In Bitcoin’s case, the coin managed to breach the $50k resistance and go up to $51.5k before a correction started knocking the price down. At the time of writing, BTC price is back down below $49,725.

As for Ethereum, the coin saw similar behaviour, although with a bit more success than BTC. It managed to reach a new resistance at $1,750 twice in the past 12 hours before the barrier level rejected it down to $1,677, where it sits at the time of writing.

Ethereum price flirts with $3,400 amid a potential bearish flip