The last week has been very kind to Bitcoin and Ethereum. The two leading cryptocurrencies once again saw strong price surges that allowed them to break new records, In fact, both coins hit new all-time highs barely hours ago.

In the first half of February, Bitcoin price skyrocketed after the news of Elon Musk’s Tesla investing $1.5 billion into the coin. Despite the fact that the company has since faced scrutiny due to the move, and even the US SEC decided to start an investigation regarding the move — the coin’s price did not stop growing.

Originally, Bitcoin surged to $48,200, only to break that record and come very close to $50,000 per coin last week. However, resistance proved to be too strong for Bitcoin to breach it. The coin saw a minor correction, which was then nullified as the third week of February began. After that, Bitcoin simply kept climbing as the week went on.

After reaching $50K on 16th February, Bitcoin surged even higher, hitting $52,550 on 17th February, according to data from CEX.IO. For the next two days, price traded sideways around $52,000, only to see a sudden surge on the 19th February.

The biggest development that may have caused the surge was the decision of Blackrock — the world’s largest asset manager — to enter the Bitcoin space. Other than that, there was another major news from several days ago, which reported that Canada brought the first Bitcoin ETF in North America.

While Bitcoin was busy with its surge to $56.5k, Ethereum saw a surge of its own. The coin’s rally started on February 15th, after seeing a massive price drop that took it from $1,812 to $1,658. After hitting this low, the coin saw a recovery that took it all the way up to $1,830 on the very same day.

After that, ETH saw another, milder correction to $1,728 on 16th February, followed by a surge that did not stop ever since. ETH first reached $1,900 on 18th February, but it quickly moved past it, and kept growing throughout the day. 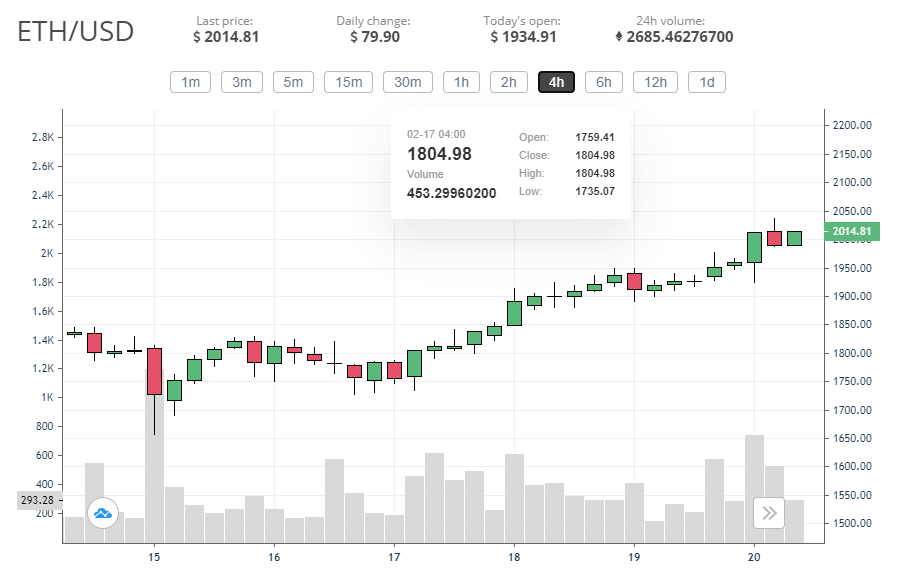 What will happen next?

Our original forecast, made based on Bitcoin’’s stock-to-flow model, was that the coin will hit $50,000 by the end of Q1, 2021. However, Bitcoin price has already reached and exceeded this massive milestone by mid-February, indicating that the coin is moving faster than expected.

Next, we expected to see Bitcoin hit $80,000 by the end of Q2 — June 31st — but given the rapid surge that has gripped the coin’s price, this milestone might also be reached significantly earlier. Another thing worth mentioning is that Bitcoin price should reach $90k by the end of Q4, although this might also be subjected to change. The uncertainty regarding crypto prices is the highest during surges, so Bitcoin might reach this record earlier, as well.

As for Ethereum, the coin has already surpassed my expectations for Q1. We expected it to climb to $1,300 by the end of the first quarter, and only hit $2,200 by the end of Q2. However, the way price has been behaving these last few days, it is likely that this milestone will be reached much sooner than that.

As for my end-of-the-year prediction for Ethereum, we believe that it could go up to $4,900 by the end of Q4, especially due to Ethereum 2.0 launch that started on 1st December, after its deposit contract was rapidly filled.