My next prediction is Seascape, and the market cap is just $28m rn, very similar to Audius, however, in contrast to Audius, the networking effects are arguably ‘stickier’ and more significant within the game developer space than in the music artist space which Audius targeted. Seascape currently has a 24h trading Volume (ticker: CWS/USDT) of just $105k on MXC.com and $168K on gate.io and $1.7m total trading volume across all platforms (coingecko numbers). Check it out here:

Recent price action showed an accumulation phase occurred over 5 days within a symmetric triangle formation above the $15 support zone (which held strong with heavy buyer activity seen), leading to a 50% upside breakout move, extending price action above the previous support of $24. Price action now remains steady within the $25-$30 region and it looks like another symmetric triangle accumulation will be forming before a 2nd upside breakout soon, especially if holders buy in following this post. A vigorous Elliot Wave impulse completing a fibonacci retracement to $50 is now strongly predicted, with an expectation of turning the $50 resistance level into a new support for growth towards $100. Price action has crossed and is being watched to stay above the 50 day MA.

Seascape seeks to become the STEAM game distribution platform for DeFi and this is a much more realistic proposition than becoming a massive AAA-game developer such as the Activision of DeFi, indeed, we are years away from seeing anything like that. Like Audius, this is a coin with a website that the GENERAL PUBLIC CAN UNDERSTAND with a product that can be used now, granted they only have a few games, they are developing their blockchain to make it very cost effective and scalable for much bigger game titles to use them as their in-game coin economy partner, making Seascape a great choice even if a game developer has much better distribution than Seascape now (which would only help Seascape further market itself).

Fundamentally, Seascape is an in-game economy technology partner first and foremost. They are doing the hard stuff, unlike Ultra, so that they later this year become THE distribution partner of choice for DeFi game titles. Ultra is basically Steam with tokens with a few big name game developers using them as first movers focused on marketing and player incentives, and hit an ATH of around $250m market cap. Seascape can do what Ultra does in a much more powerful way using their current technology AND Seascape intends to build out much more intensive player incentivisation than those Ultra has on offer now, so in terms of market cap, Seascape has the fundamentals to exceed Ultra by a factor of at least x3.

I also have contacts at Supercell (who made the great Clash of Clans) and I will hook these guys up. I spent the last few days talking to the founder of Seascape and drilled him for information and believe they are on the right track for stellar growth. 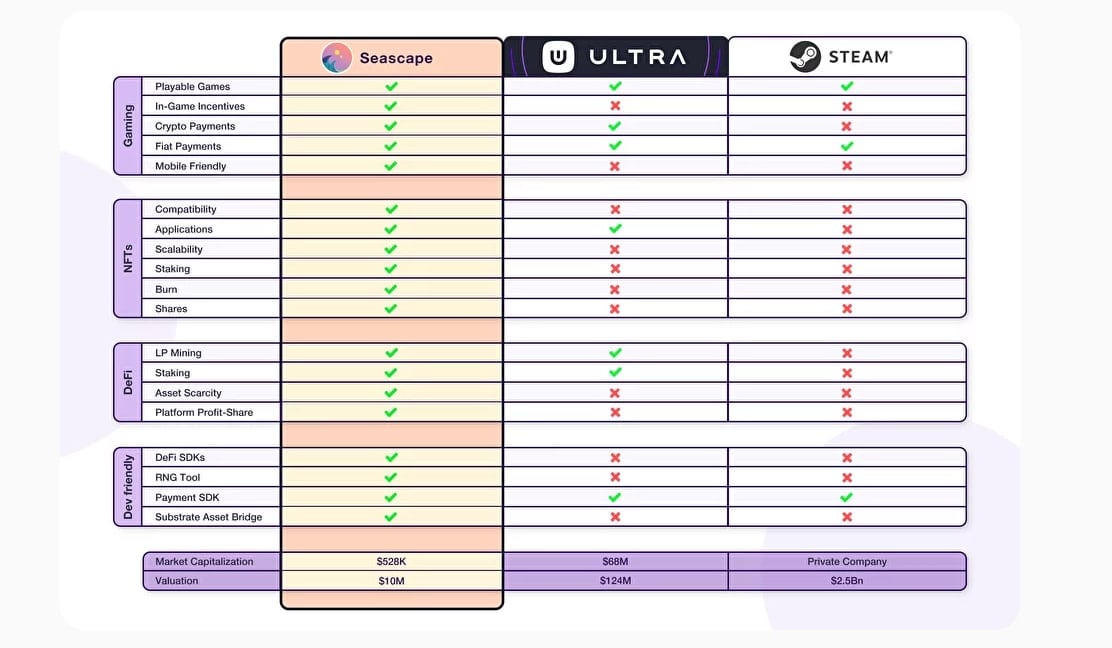 Seascape and NFTs: 25,000 Seascape gaming NFTs have been minted on the BSC and millions of dollars dropped to users through their LP mining game. Increase in its NFT economy alone could add an extra $50m-$100m to its mcap over the next couple months.

Remember: this is a Reddit post, it is NOT financial advice, dispense your loads where ever you wish after doing your own DD and research and maybe throwing a dart at a wall. YOLO. I’m in for around 2,000 CWS held right now.

pCWS is the bridged version of CWS (the currency of Seascape on ETH) on BSC (Binance Smart Chain). Users can bridge from ETH to BSC using poly.network bridge. 1 CWS = 1 pCWS as they are completely interchangeable. Here’s a walk-through of Polybridge: https://medium.com/seascape-network/bridge-your-crowns-to-bsc-today-through-poly-network-eaabde846d1

High number of coins in a few wallets:

Audius had a similar position where 84% of coins were held in 2 wallets. Seascape’s token release schedule is structured to cause growth in their ecosystem and corresponding growth in their price to mitigate future inflation effects. Essentially new games will be backed by newly released CWS acting as collateral for newly minted game coin economies generated on the Seascape blockchain. This means, as a new game grows its user base and its in game economy grows in value, those additionally released CWS should in effect pay for themselves mitigating inflation effects. Interestingly, Audius had a similar reason for releasing new coins, i.e. to attract new artists, and it grew from $27m mcap to an ath of $580m.

Robinhood CEO outlines how DOGE could become ‘currency of the internet’